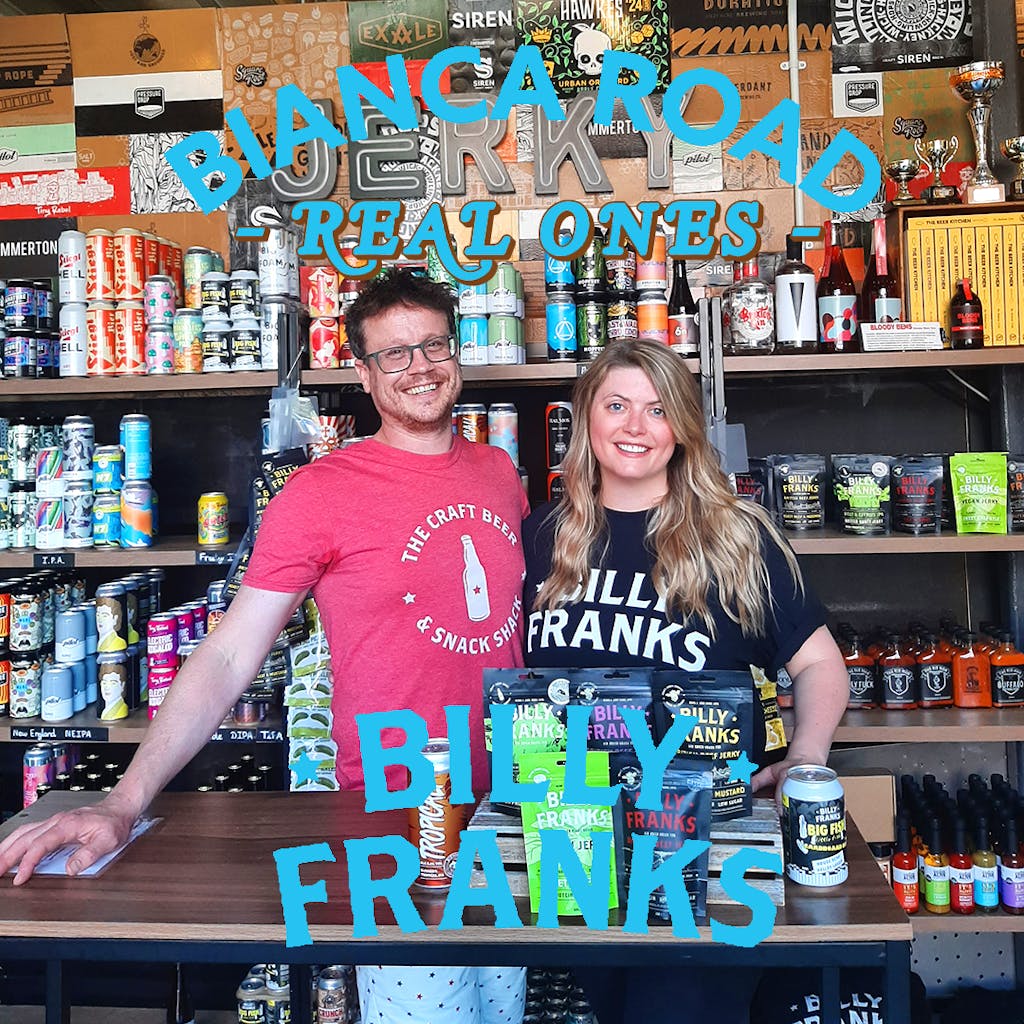 Will and Lauren aka Mr and Mrs Billy Franks

I had the absolute PLEASURE of talking to the cowboy beef jerky husband and wife team Lauren and Will of Billy Franks. We discuss their old school Scottish roots, their love of America, British quality and the 90’s rave scene.

BF: FAMILY, PROVENANCE & QUALITY
FAMILY because we’re a husband and wife team. PROVENANCE for the jerky; it’s made in small batches, we put a lot of care into the products that we make; it’s important for us to make them the way we make them. It’s pretty much like a brewery, with the production and everything. And QUALITY because we’re proud to use British meat and proud of where we get the beers from (which are 99.9% British)

TELL US ABOUT YOUR JERKY

Mrs BF: Will started making it 10 years ago to the day nearly, the machinery has grown and grown, Will quite his job and I quite my job.
Mr BF: I still hand make all the marinades and cut up the meat myself.
Mrs BF: The reason we started making it, is that you just couldn’t get good quality beef jerky back in the day. Which Will also knew about as he grew up in America for 10 years.
Mr BF: Finally some appeared in WHSmith and looked at the back of the packet and realised half of it was sugar and was like hmmm nah I can make this better myself and started making it. Ours is the lowest amount of sugar: 92% less than the other guys. Higher in protein, it’s all natural, we don’t add any nitrates or preservatives or e numbers or anything like that so it’s all natural. It’s really good quality. All the meat is sourced from the UK; the turkey comes from Pembrokeshire, it’s organic and free range. The pork used in the pork and cider one is free range from Suffolk and the beef is grass fed. And we also have the very delicious vegan one!

WHAT ARE YOUR FAVOURITES?

MRS BF: Buffalo Hot Wing Turkey Jerky
MR BF: The Cheeseburger one. I always love a cheeseburger and my wife doesn’t let me eat them all the time…so I crave the healthier version, or of course the Tropicali IPA version.. 😉

WHAT IS YOUR FAVOURITE THING ABOUT THE CRAFT BEER SCENE?

BF: The community. Its nice especially because of covid too, people want to support the smaller guys.

WHAT DO YOU THINK MAKES A PROPER BAR/BOTTLESHOP?

BF: It’s probably a mixture of the staff working there, that’s a big part of it. It’s got to be welcoming, there’s got to be a good vibe. For instance, with the bottle shops, sometimes it can be a little overwhelming. If someone comes in if they’re not like a beer aficionado, they’re like f**k what do I choose? So much choice! We never want it to be so overwhelming and pretentious, if you like this type of beer, then that’s fine. People come in and say “I only like lagers I’m sorry” and I’m like “no! Lagers are great!” If you get a really good quality lager they’re delicious and we can point a few out that will be suitable. So I think being approachable is definitely is one of the main things, people have to feel comfortable being there.
And also the beer and the quality of the drinks and food on offer for sure has to be good- good jerky and good beer and good atmosphere and welcoming vibes

BR: IF YOU WERE A BEER WHAT BEER WOULD YOU BE?

Mrs BF: a fruity new England IPA because I’m from New England, and I like tropical ones
Mr BF: a spicy porter

MR BF: Tropicali, we use it in our jerky 😉
MRS BF- Blood Orange

WHAT DO YOU THINK IS THE BEST THING ABOUT BEING IN LONDON?

BF : Probably the people to be honest, there’s just so much going on and so many people doing it. It’s multicultural. Its great, we meet people from all over the place and I think lockdown has brought the best out of people, which I know sounds strange. But I think people obviously crave that social aspect and when everyone was released into the wild, I think everyone really appreciated being able to socialise and getting to know each other and just chatting! I think that was probably the nicest thing to come out of that, but also that’s what’s great about London; people opened up.

ANY FUTURE PLANS FOR BILLY FRANKS?

BF: Potential plans, new products, new snacks, another beer as part of our beer projects..
The first one is the Big Fish Little Fish Cardboard Box- an ode to my misspent youth in the 90s, dancing in a field all night. Each can has a playlist that you scan on Spotify. So this one has lots of 90s rave music it. and it’s paired with specific jerky.

WHO DO YOU THINK IS GOING TO WIN THE EUROS

BF: Club before country- my team is Liverpool- Franks from Billy Franks is my scouse granddad, so while I don’t like anyone from my team getting injured on international duty- I do have a soft spot for other countries. It would be great for England to win something in my lifetime. But I don’t see that happening. Otherwise I would quite like Scotland to win it.

SO! After you’ve had a few nice beers down Enid Street come down to 104 Druid Street. The destination for mainly British craft beer and excellent quality homemade jerky x